Fountain Manor Condominiums is part of a rich history that developed right along with the City of Greensboro in the boom times of the mid-seventies.  Construction began in 1973 as The Watergate Apartments upon the site of the old Revolution Mill Reservoir in the heart of Irving Park across Elm Street from Browntown.  Plans called for luxury two & three bedroom apartments with the latest extravagant features designed to combine Southern charm and condominium living.

But … in 1973 things were happening in another apartment building in our nation’s capital that made the name “Watergate” very contentious and perhaps unpopular. 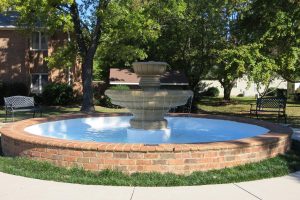 And … the Irving Park neighbors, particularly those in Browntown, were overwhelmingly opposed to apartments in their area of town.

What to do – Brown Realty, developer of Browntown and The Watergate Apartments had a challenge – unhappy Browntown residents and a marketing nightmare.  Thus FOUNTAIN MANOR CONDOMINIUMS was born, keeping the neighbors happy and making the unpopular name – Watergate – disappear.

By adding a decorative fountain with a reflecting pool in the center of what had initially been named Fountain Manor Circle the new name made sense.  The first two buildings – what are now #4 and #6 Fountain View Circle – were
underway with more flats to be completed as sales mounted.  Soon owners of large homes in Irving Park began to think of downsizing with the new condominium neighborhood in mind, and it became apparent that larger and more luxurious townhomes would sell well.  So Brown Realty built them – and the owners came!

You might wonder why there are so many different features and slight adjustments in the floor plans of your neighbors’ homes?  It’s because the developers were willing to accommodate the custom features requested by a discerning clientele as the four phases of construction progressed.